Identifying your induction hob is easy if you know what to look out for. If you have recently moved into a new home, it may not be immediately obvious what type of cooking surface you are using. An induction hob is very different to a typical electric hob, so if you are unsure, there are a few simple things you can check in order to find out.

What is an induction hob

An induction hob heats using electromagnetic currents and a coil of copper wire in the hob. The induction produces an alternating current, which causes the coil to produce a magnetic field. When this comes into contact with the surface of the hob, it generates heat by creating friction between molecules.

How do I know if I have an induction hob? 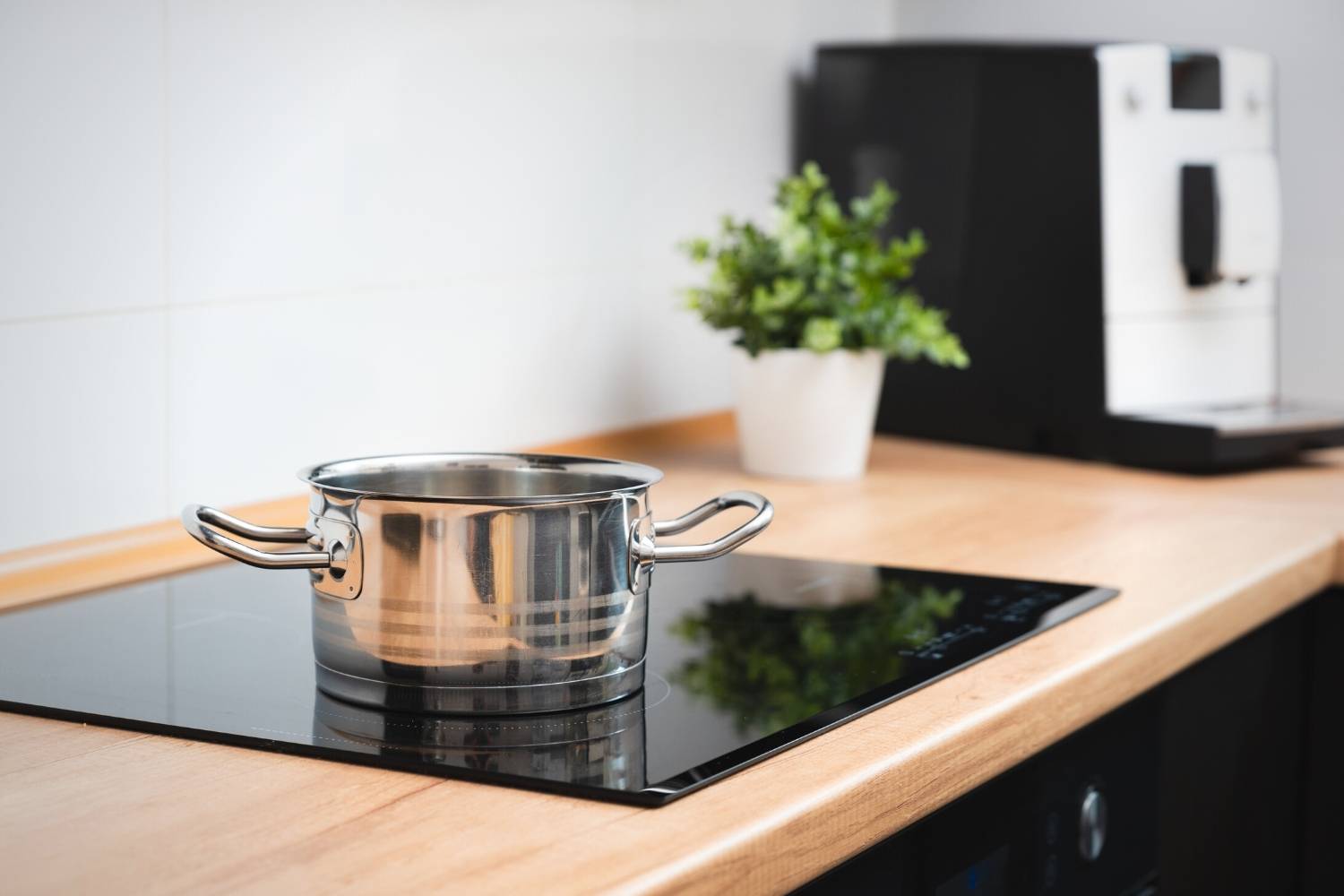 If you have an induction hob, the markings “induction hob” or “induction cooktop” should be clearly labelled on the front. The control dials will also most likely not be numbered and are likely to show a symbol of a coil rather than numbers. There may also be symbols showing that it is compatible with pans from other countries.

If your hob is not labelled as induction, it may be a ceramic hob. Ceramic hobs are heated using electricity, just like regular electric hobs and do not work with induction pans. A typical ceramic hob will also have numbers on the control dials which go from 1-6 or 1-9.

How do induction hobs work?

An induction hob uses electricity to heat the pan by inducing current in it through a magnetic field.

Conventional methods involve using thermal transfer or reheat. Conventional ceramic hobs heat up and then release waves of heat that bounce around the cooking space until they hit your pot. Induction hobs typically have a glass surface sitting on an interconnected copper coil. When a metal pot with magnetic characteristics can conduct electricity, induction technology creates alternating electric current which can be passed by the pot.

When the magnetic field is created, electricity flows through the base and into a pot. The pan acts as a conductor that transfers heat to your food rapidly. In induction cooking, an additional step creates this field—it’s much more complicated than using a traditional stovetop because it can be difficult to create such precise coils needed for most induction hobs. 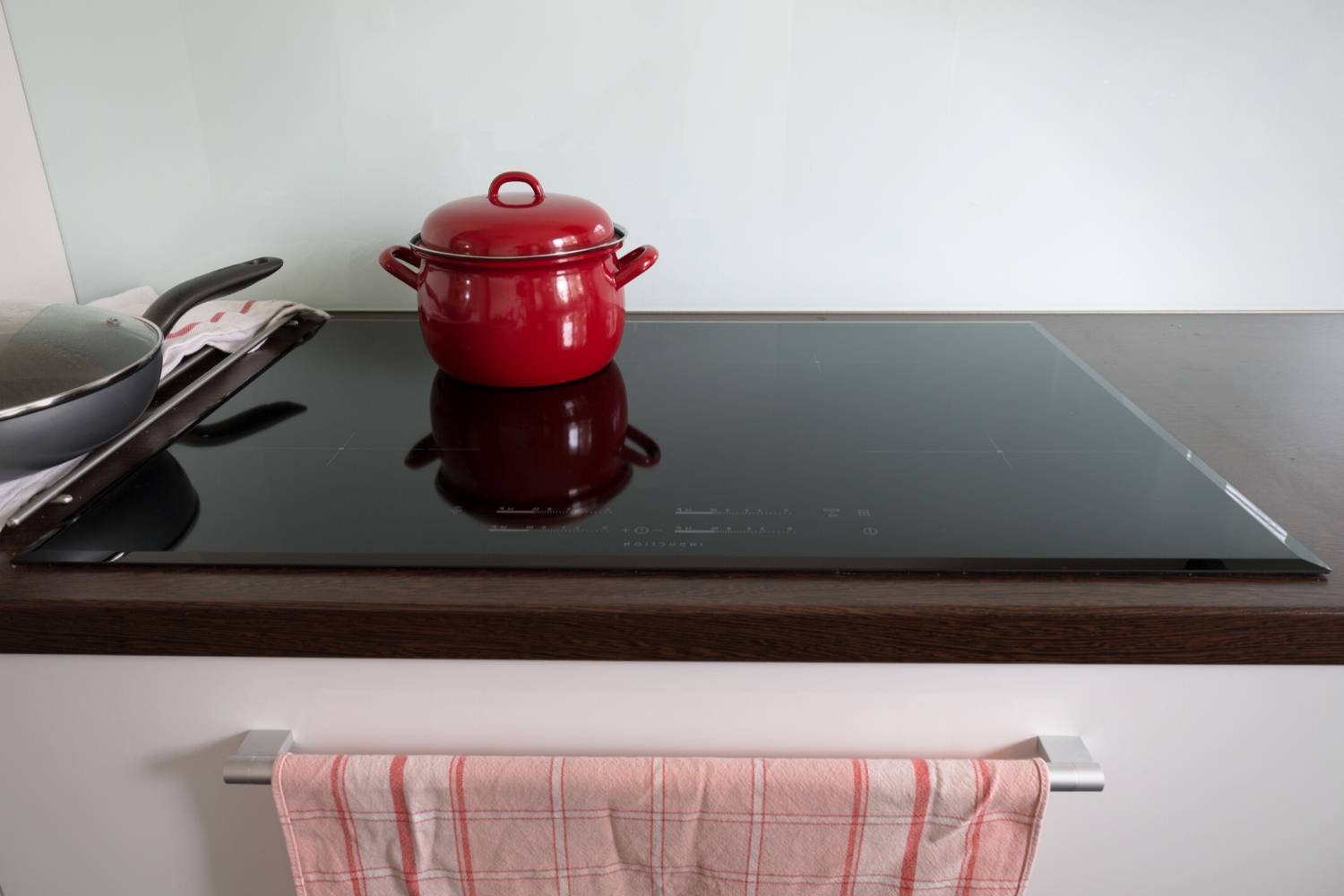 Induction hotplates transfer heat directly to the pan rather than the plate, so you can boil water faster than with a kettle. Newer hobs might look the same, but you can tell if it’s induction or not by looking for an indicator light and turning it on. Leaving the oven off will let the ring cool down before using it again. Induction-powered hobs work differently in that they don’t need to have pans placed inside a heating.

If you’re looking for kettles and pans for your induction hob, check out our full post on Best Induction Hob Kettles UK and Best Induction Pans UK here.

Induction hobs are wonderful and will become an essential part of your cooking. Here are also some of the advantages of induction hobs:

The energy efficient a new induction hob is, the more money and energy you save in the long run. With a gas hob, all of this heat goes to waste while using your pots and pans wastes even more energy. When it comes to energy efficiency, induction hobs are reliable. 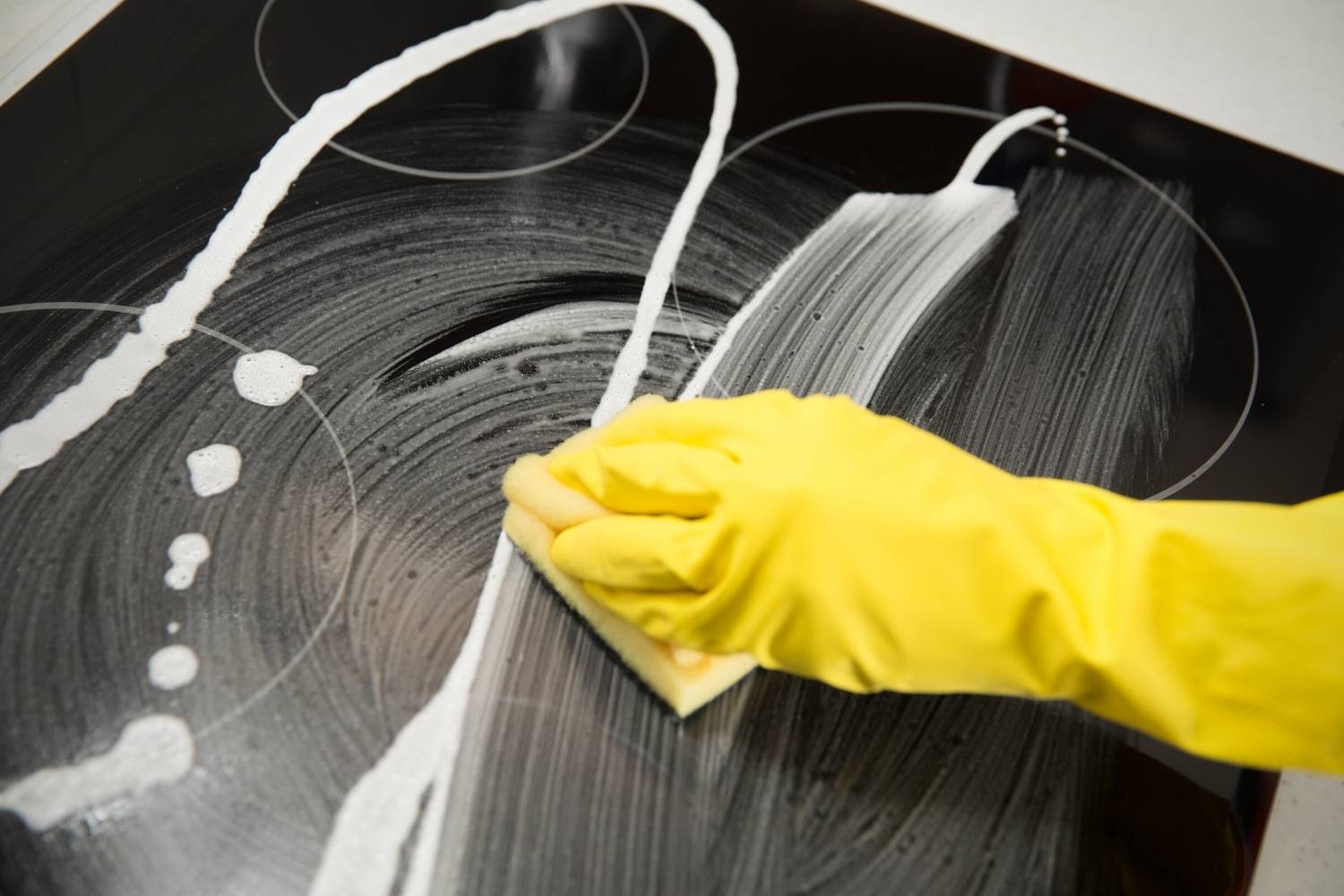 Unlike gas and traditional electric hobs, which are hot and can take a while to cool down, induction hobs are flat and easy to clean.

Induction hobs heat up quickly because they transfer the heat through electromagnetic force, giving users more control compared to gas.

An induction hob prevents direct contact between the pan and the stove top. This means it dramatically reduces burn risk, as well as minimizing potential damage that can occur to your oven gloves due to proximity with a hot surface.

How long do induction hobs last? 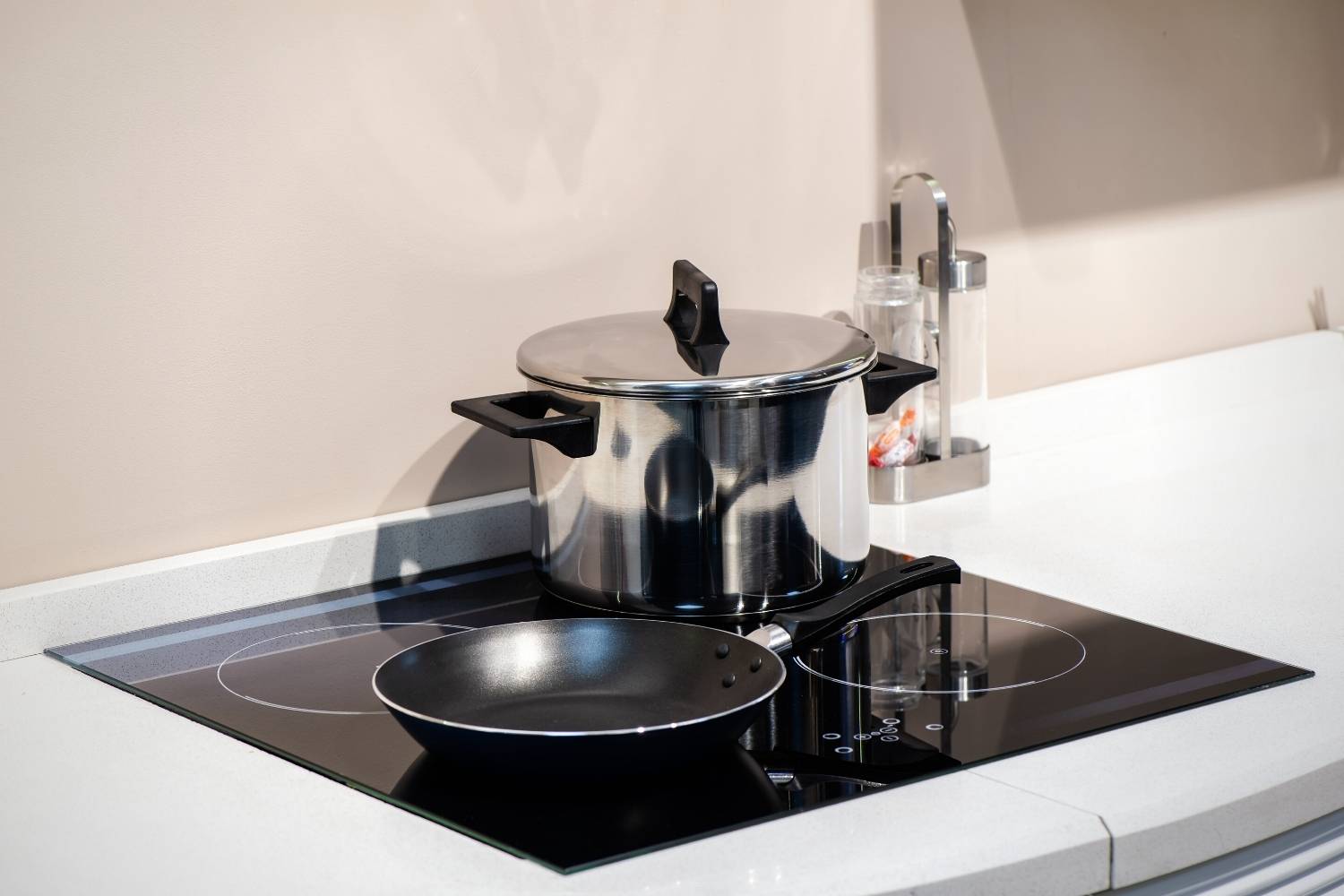 Induction cooktops should last for years and years with normal use. An induction hob surface will not be as durable as it’s ceramic counterparts, so “rough” utensils such as metal whisks and paddles should be avoided to prevent scratches on the cooking surface.

The best way to clean an induction hob is with regular soap and water and a nonmetallic sponge or scrubber.

There are three elements on an induction hob. Most commonly, the four-zone hob is ceramic with zones on each side of the cooking unit creating five separate areas. Other popular options include a zoneless hob that takes up the whole area and can hold around 5 pans at once or the 4 zone flameless heat, where only one part is turned on at a time so the heat is controlled and exact.

Difference between ceramic and induction hobs

Ceramic hobs are made from a black glass-like surface that’s heated up by gas or electricity. The cooking zone heats rapidly when turned on, then after approximately 10 minutes it begins to cool down. Ceramic hobs have two additional elements that can be used independently of one another for different heat sources. The lower element is used for cooking at low temperatures, while the upper element is ideal for high-temperature frying and searing.

Is induction cooking good for your health? 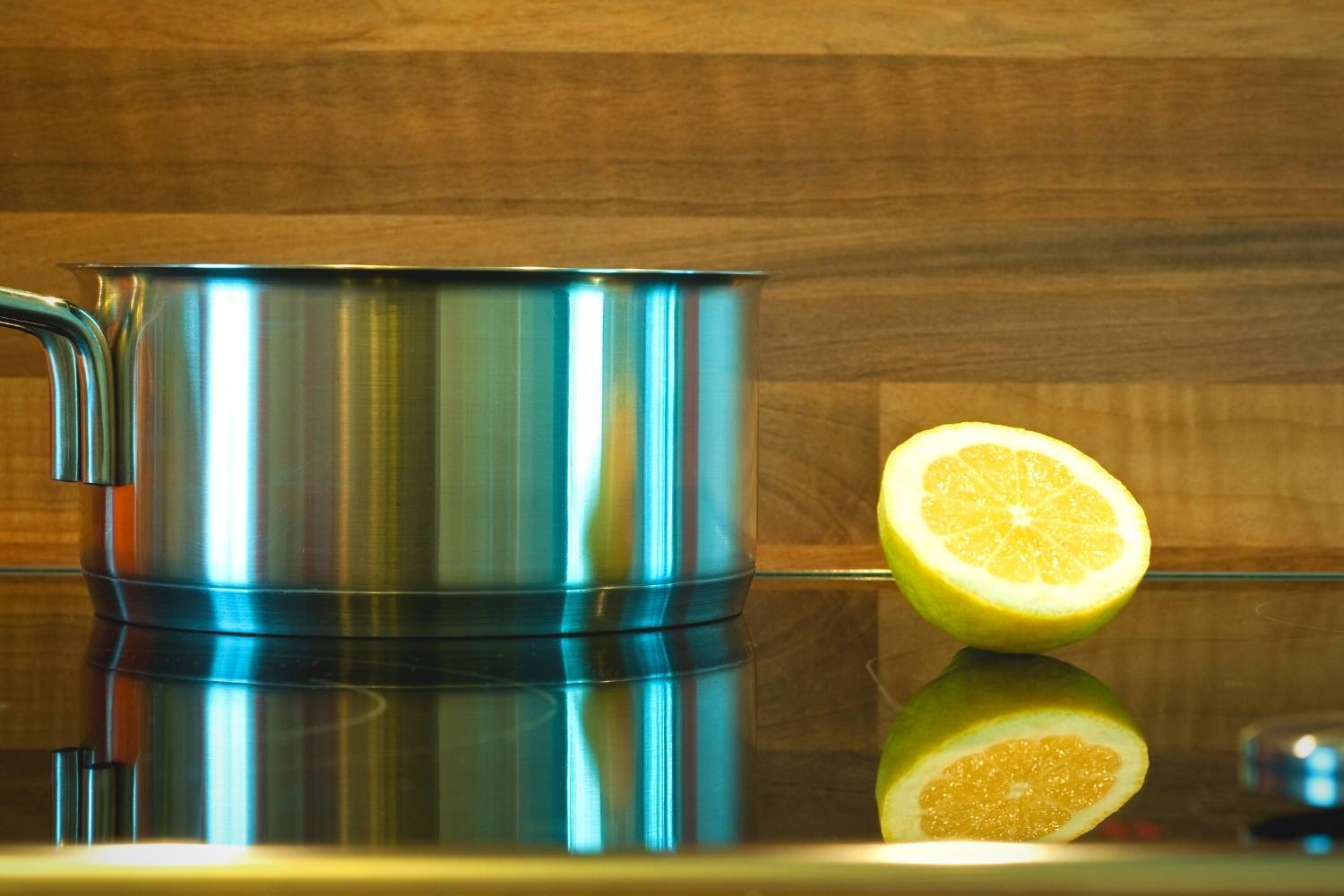 What Do Chefs Prefer? Induction or Gas

Gas was used in the professional kitchen, and it was a requirement for any home with an “entertainer’s kitchen.” The induction hob, which has long been considered second to gas hobs, is presently becoming more popular among many of the world’s best chefs.

It’s not true that every piece of cookware can be used on an induction hob or stove. The cookware must be magnetic and feature a flat bottom since induction technology relies on the power of magnetism. As a result, Pyrex, aluminum, copper, or glass-coated cookware is ineffective alone. 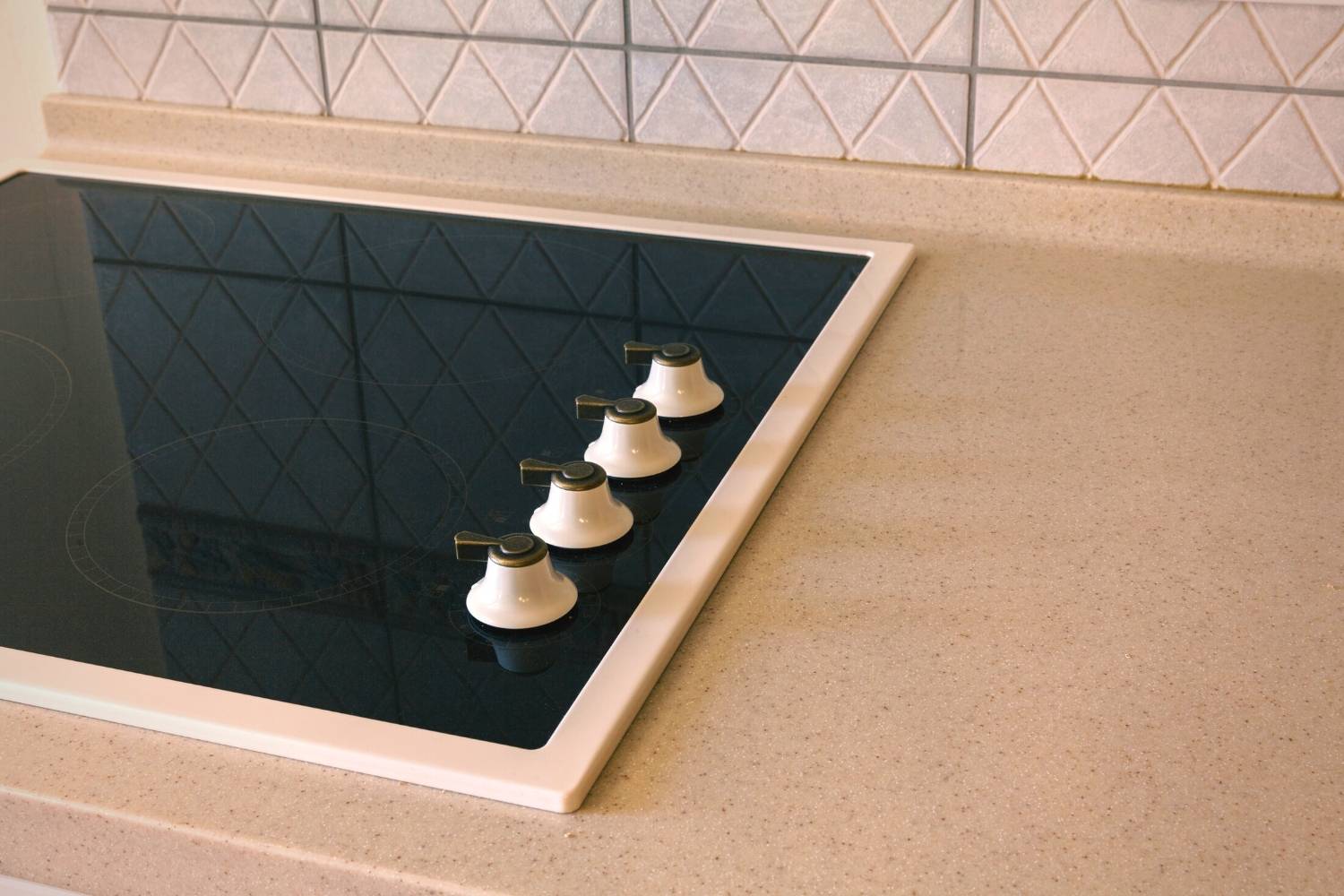 When it comes down to it, induction cookers are a great choice. They are more affordable than gas and twice as efficient, so they will save you money in the long run. If you happen to have an older home with gas hobs, there is absolutely nothing wrong with that! It’s all about personal tastes and preferences – do what you love and enjoy.